This article covers all you need to know about Nosto and Facebook Pixel.

A key component in Nosto’s Facebook integration is the Facebook Pixel, how it’s managed, what capabilities it enables, and how you can troubleshoot potential errors.

Facebook Pixel is a snippet of code that is loaded on a website that helps Facebook track its users. This dataflow is required to enable Facebook to track how well your ads perform by seeing what a user does on a website after viewing an ad in Facebook’s network, which also includes Instagram and Messenger.

Each Facebook ad account has a Pixel associated with it and every time an ad is created, the same Pixel is associated with that ad. The Pixel sends small signals to Facebook, which are called “events”. When a user is browsing a website, the Pixel triggers events on the website, and sends them to Facebook. Based on the events that were triggered, Facebook can trace back to the ad account, and even single ads and a user. The event data collected typically includes the context of what the shopper was doing, such as browsed products, what they added to the shopping cart, and eventually bought and so on. To conclude, the Pixel is the conversion and event tracking method by Facebook.

How does Nosto manage the Pixel and audiences?

When the Nosto script loads on your site, it checks if there’s a connection to your Facebook ad account. If the connection exists, Nosto script loads your ad account's Pixel and triggers the appropriate event to the Pixel, depending on which page the script has loaded. To emphasise the methodology: Nosto’s script used in the integration loads your Facebook pixel, adds the events, which are directly sent from a client-browser to Facebook.

The listing of the events the Nosto script triggers can be useful for developers and ad agency specialists. The Nosto integration includes and adds standard e-commerce related events to your Facebook Pixel, listed below:

How to create a custom audience with Facebook Ad Manager

The core concept is that there are no pre-created audiences, but you need to create these yourself depending on your need yourself. We do this to avoid flooding your business manager account with unused segments.

Technically, when the Nosto script loads your Facebook Pixel, it sets the visitor’s current Nosto segment and sends it to Facebook. Consequently this allows to create an audience in Facebook based on users that have that segment detail associated with their profile.

Practically this is done through a few simple steps familiar to most ad managers, in screenshots screenshots below. (please note that your Facebook business manager experience might differ) 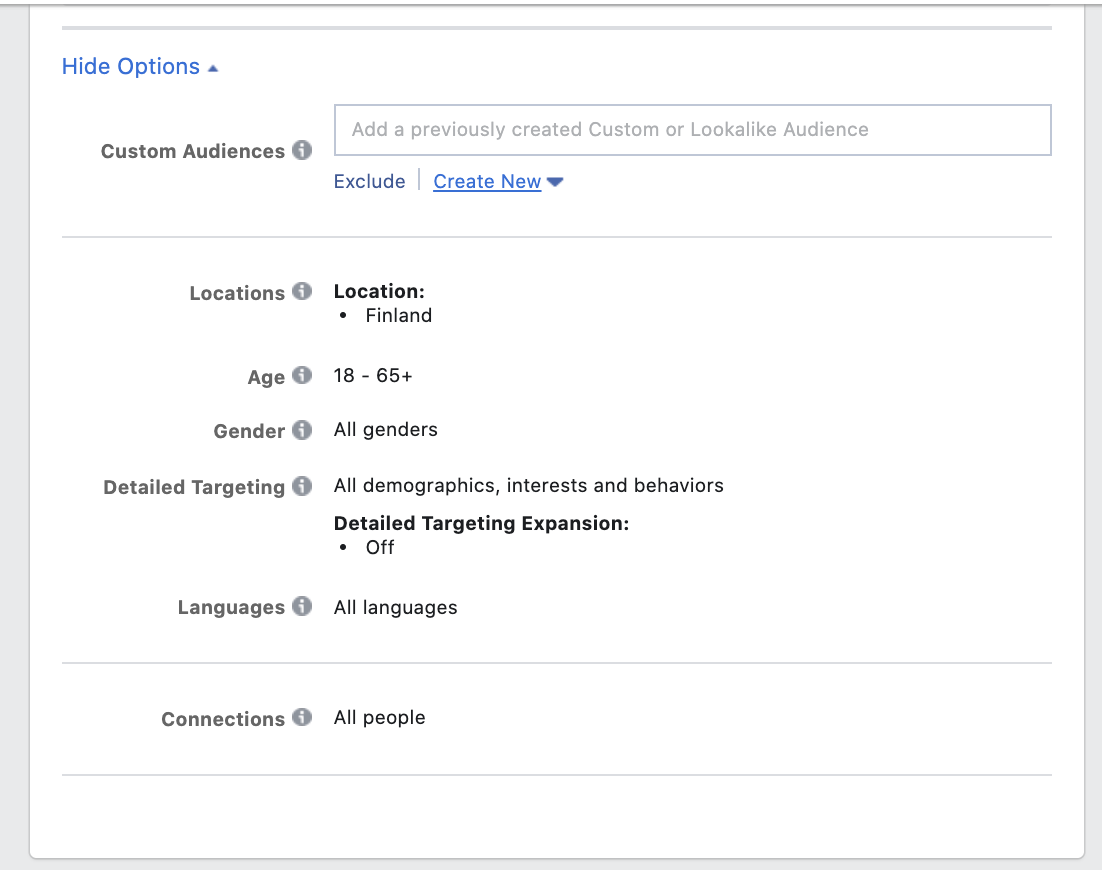 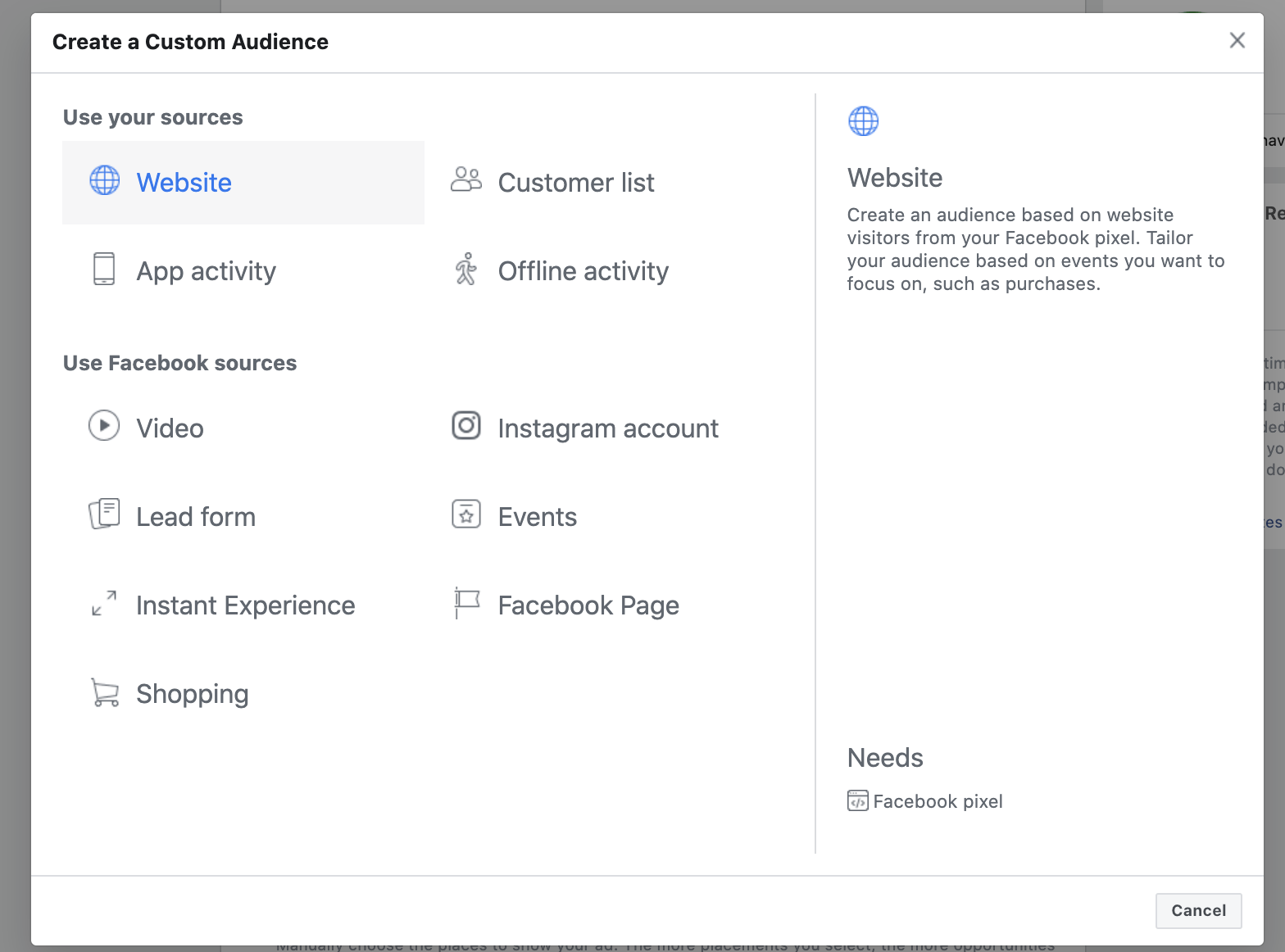 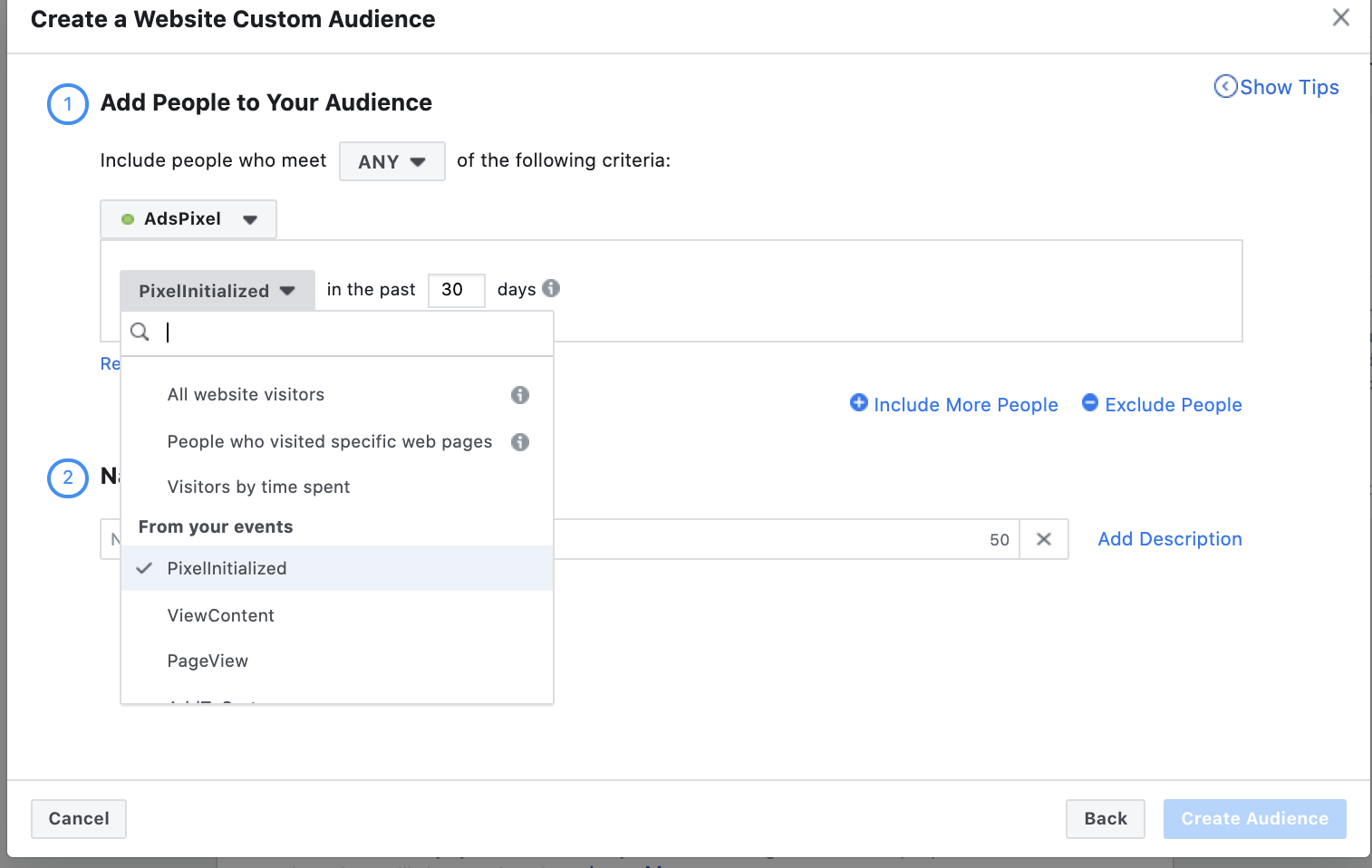 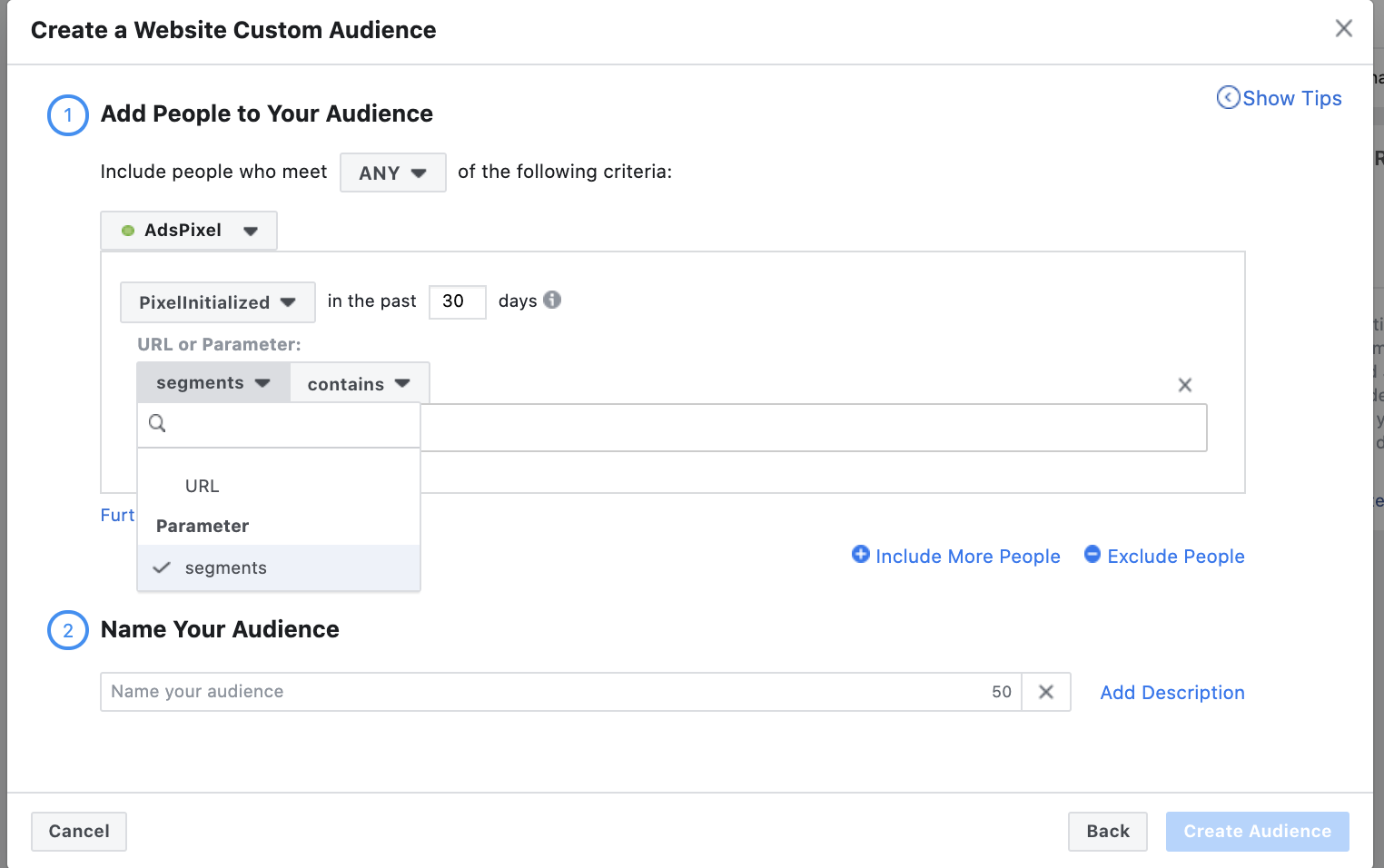 The Nosto script triggers the ViewContent Pixel event when a shopper has viewed a product. If the same shopper doesn’t finalize their purchase, that event can be used to create a retargeting audience out of users who went on viewing products instead of just visiting the site in the past 7 days as seen in the example below. As a friendly tip: Remember to exclude audiences who have already bought.

Most ecommerce websites already have the Facebook Pixel in place, which means that enabling the Nosto Facebook integration might either interfere with the existing Pixel setup or simply might require one or two additional steps before moving ahead. Most common issue is called “double-pixel attribution” and explained thoroughly at the end of this article. Typical setups as suggestions helping you to avoid the issue are listed and described below.

Despite the chosen method, these all help you to avoid tracking issues caused by the same Pixel populated to the website twice, which is the most common tracking issue. This is typically if not always caused by connecting the Nosto account to an ad account and Pixel, which is already populated to the website either by another app or by yourself “manually”.

The double attribution is caused because another script is firing the same Pixel events as the Nosto script, which means Facebook processes the same events multiple times (e.g. two purchases when only a single purchase was made), which might severely harm your ad performance analytics. In order to avoid the issue to a degree possible, Nosto implements trackSingle operation as advised by Facebook, however if the other party adding the pixel does not use this, but instead uses track operation, it forces and might cause attributing events like purchase conversions twice.

Before connecting Nosto to your Facebook ad account, review with your administrator how you manage the Facebook Tracking Pixel and whether you should remove the existing one or use two Pixels under the same ad account.

How To Review Existing Pixel Setup

As a rule of thumb, the Pixel that Nosto adds to the website should only be placed by the Nosto script on your page and not by any other app or mean. If you have any code or a third party plugin running on your site that manages the same Pixel, this should be removed. You can use Facebook's Pixel Helper plugin to check which Pixels are running on your site and which events are being fired to the Pixel. If the Pixel helper shows an event has been fired to the Pixel, which is not one of PixelInitialized, ViewContent, AddToCart or Purchase, then something other than the Nosto script is firing events to the Pixel.

Below is a screenshot of the Pixel Helper plugin showing that 3 events have been fired. The Nosto script only fires the PixelInitialized event, so this site has something else triggering events to the Pixel. 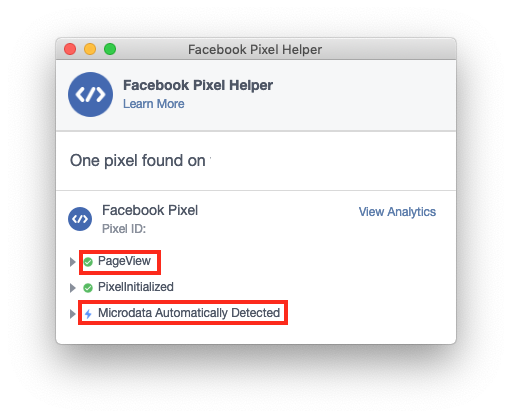 How can I find what's interfering with the Nosto script's Pixel management?

You can use Chrome's developer tools to look through your site's code to find out what piece of JavaScript is also managing the Pixel. These steps are quite technical, so you may need help from your web developer to complete them. 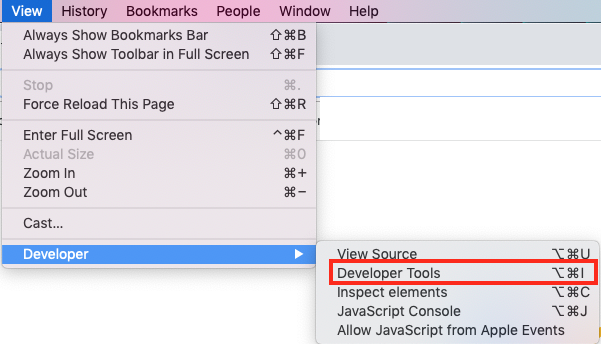 Click the three dots on the right hand corner of the developer tools and choose search.