Nosto supports technical evaluation on a test environment and on local devices before implementing on a production environment with some limitations and cautions.

When a new Nosto account is opened it comes with a unique identifier: accountID, which is available on the Nosto admin panel under menu Account. Use the same accountID when implementing Nosto on a test environment.

The hostname settings on the Nosto admin under menu Account define the address(es) for Nosto from which hostnames traffic should be accepted and processed. These should always refer only to a production site if the account is intended for production use, even though Nosto would be first implemented on a test site with a different hostname. Therefore, as a rule of thumb, keep the settings intact if they refer to the production site.

In case a development environment is defined as one of the hostnames Nosto will accept traffic from the development site. Consequently this will pollute Nosto’s index with test data and eventually cause that links in Nosto’s recommendations point to the development site when clicked on a live site leading to a bad customer experience. In such a case, consult Nosto’s support and describe the issue clearly.

You must use a valid domain for your website. If you are creating a test account and running your store locally, you must use valid TLD as localhost is not supported.

We recommend using .dev TLD that is aliased to localhost. Both .dev and .test are reserved by Google and IANA for testing purposes. Find more information in our documentation. You will need to edit your operating-system dependent hosts file to add an alias for the domain you are using.

In case a safe sandbox environment is required for testing and developing Nosto recommendations, consult your salesperson or Nosto support for a separate Nosto test account used only for development. A Nosto test account features a notification bar in the Nosto admin clearly stating the intended use for the account (see image below)

Assuming that you use only one Nosto account, before Nosto is implemented on a production site, only mock-up products and images will appear on the test site so seeing Nosto labeled mock-up products see below is expected behaviour. If nothing appears, most likely debug-mode is not enabled or the page doesn’t have any placeholders and equivalent recommendation slots, so add these first. 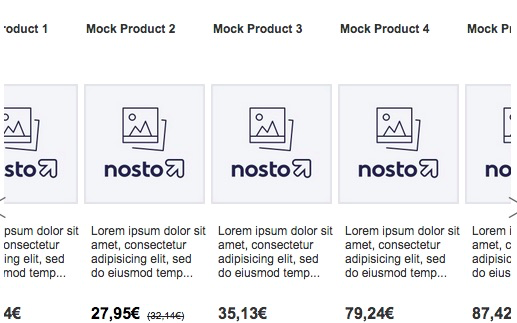 When Nosto is implemented also onto a production site accordingly, real data with real products will appear also on a test site assuming that a test and production site have similar products (productIDs) and category structures. Establishing the data exchange between a target site and Nosto doesn’t require positioning Nosto placeholders i.e. the recommendations onto a production site, but it allows front-end development on a test site leveraging real data and products. See below the same recommendation as above when production data is available. 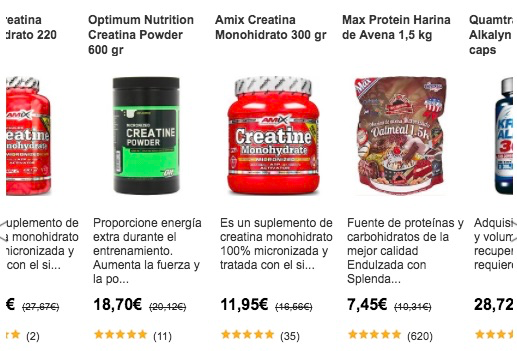 When design and development is ready on a test site, going live is extremely easy! Simply positioning the same placeholders that you have on a development environment onto a production site  will do the trick! Preview once again and when everything looks good to you, go live!

The traffic from a test site is ignored if the hostname settings are set up correctly [Youtube]. Therefore, the following recommendation types using subsequent personal visit data won’t work even though the data exchange would be established accordingly between Nosto and the production site. In other words: these recommendation slots won’t work as they will in production site.

Since traffic and page views made on a test environment are ignored by default, Nosto doesn’t track visitor history and thus seeing only mock-up products on a test site in listed recommendation types is expected and normal behaviour. If a work-around is needed, apply top list recommendation rulesets during development as these don’t use personal browsing history as a data point.

Limited Accessibility From The Internet

Nosto’s functionality relies on verification process, which is launched technically from the Internet. This basically sets limitations to test environments unaccessible or with limited access from the Internet.

Testing Nosto and all functionalities including a test order are fully supported, taking into account how Nosto tracks orders and what is considered as a sales through Nosto.

Testing Nosto on a live site using an account intended for production purposes is supported, but all sales that are made through Nosto’s recommendations are treated as an actual sales, which are not compensated in Nosto’s billing. In practice, Nosto can’t distinguish test and actual orders nor we can’t reimburse or remove accidental or intentional test orders in billing.

This does not mean that Nosto would prevent site’s test processes.

In case site’s functionalities and purchases are tested by personnel or health check tools e.g. bots, simply make sure that products are added to the shopping cart by using site’s own elements such as product listing or site’s native product promotions and not by clicking any of Nosto’s elements.  Test orders made through site’s native elements are tracked by Nosto and will be visible in the analytics, but since products are not carted using recommendations, these are not invoiced in success-based pricing.

On the contrary, test orders made on a development site and using a test account specifically intended for testing, introduced in this article, can be carried out in any manner as test account is always free and doesn’t even support adding payment details for billing. To conclude, in case Nosto is exhaustively tested before moving to production please use a separate test account for the purpose. You can Request one by contacting support.