Using your carousel's script with Nosto on Magento 2

Get your carousel spinning on M2: here a little expedient to apply the script on your Nosto template

Written by Jacopo Carassai
Updated over a week ago

In case your online shop is running on Magento 2 and you want to use your own carousel's script (Slick, Owl Carousel, Flickity, etc.) that is very much possible, but the way how you apply the carousel on our template differs a bit from the other shops' platforms.

One of the new innovations introduced in the second release of Magento is the usage of requireJS, which is a Javascript module loader for better managing scripts' dependencies and overall to improve the quality of the code.
To go (quickly, I swear!) a bit deeper to the "why" of requireJS, I have put together a few reasons:

Now, let's see what is the difference of implementation in a Nosto template, pretending the carousel you are already using on your online shop is Slick.

First up, you would need to find the name of the Slick module declared by requireJS; what I usually do is to open the browser's inspector tool and find the string "slick"

Not always, tho, the library/module you are looking for is listed in the <head> section of your shop but fret not, there is another way to get the module's name.
What is surely in the <head> section is a file called requirejs-config.js which contains the declaration of all the loaded modules.
Open the file, look again for "slick" and you will stumble upon something like this: 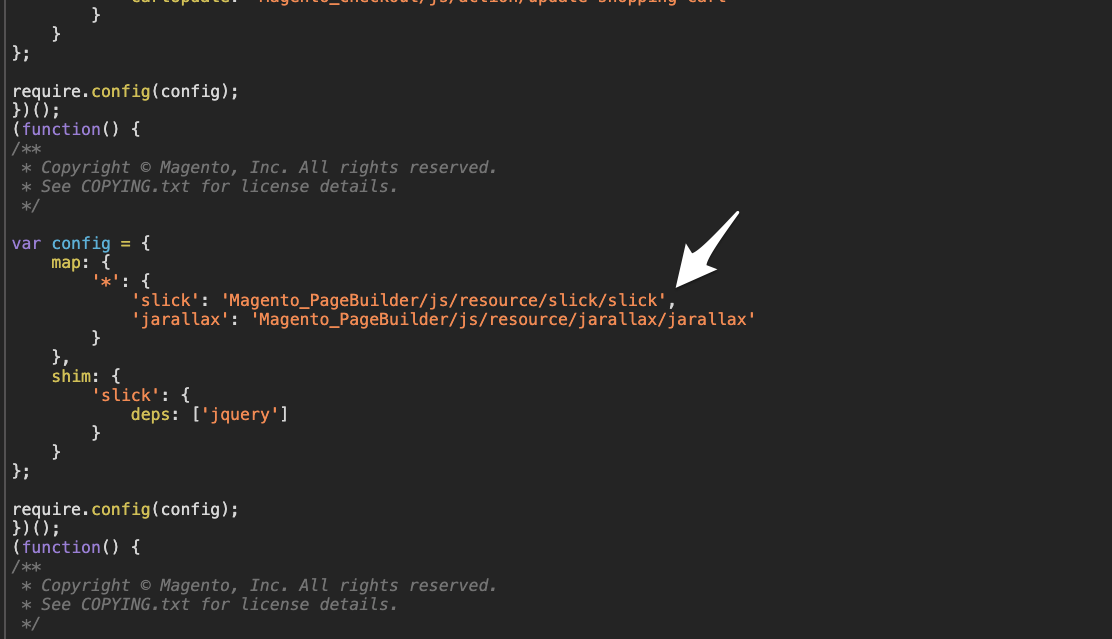 as you can see the two screenshots are showing the same module's name, so we are on the right path.
Copy that module's name in your clipboard.

And what else do we need to launching the carousel on an element? Exactly! We need jQuery, too.
So you can repeat the same operation for the string "jquery" finding for the file that most likely it is called jquery.js (or jquery.min.js)

At this stage, I have two modules' names with me:

N.B. the modules' names are likely to differ for your online shop, these are often changing depending on the theme you use.

Finally the time of using these modules in the Nosto template has come!

Open your Nosto template that you want to turn into a carousel and let's start to code.

At the bottom of your template, let's open a <script> tag in which we will write this code:

Let's explain this code a bit: