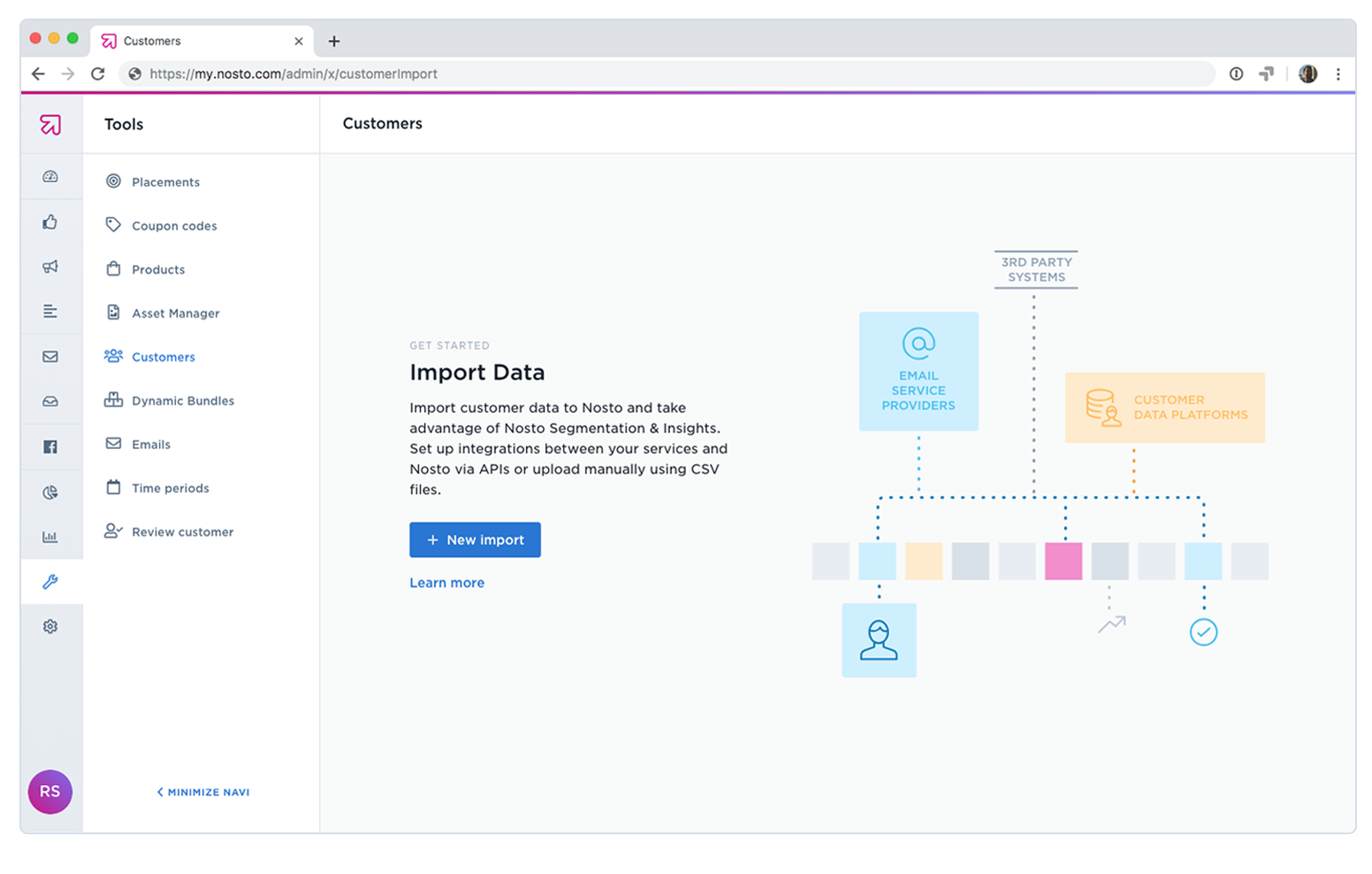 Terminology and Use Case

In this article an audience refers to any group of customers identified by their email in the source system (the data that will be imported) and an imported segment the same group of customers when it's successfully imported to Nosto and applicable as a Nosto segment.

Uploading a .csv-file of an audience is mainly useful when replatforming and when the intended use case requires uploading an audience only once or infrequently. For ongoing and automated process, we recommend continuous update via an API.

An audience list needs to be formatted according to the guidelines here where the email acts as the identifier, followed by optional attributes and associated values if applicable and relevant.

If attributes and values are included, these can be used separately as an inclusion rule when creating a more specific customer segment in Nosto, as seen below. 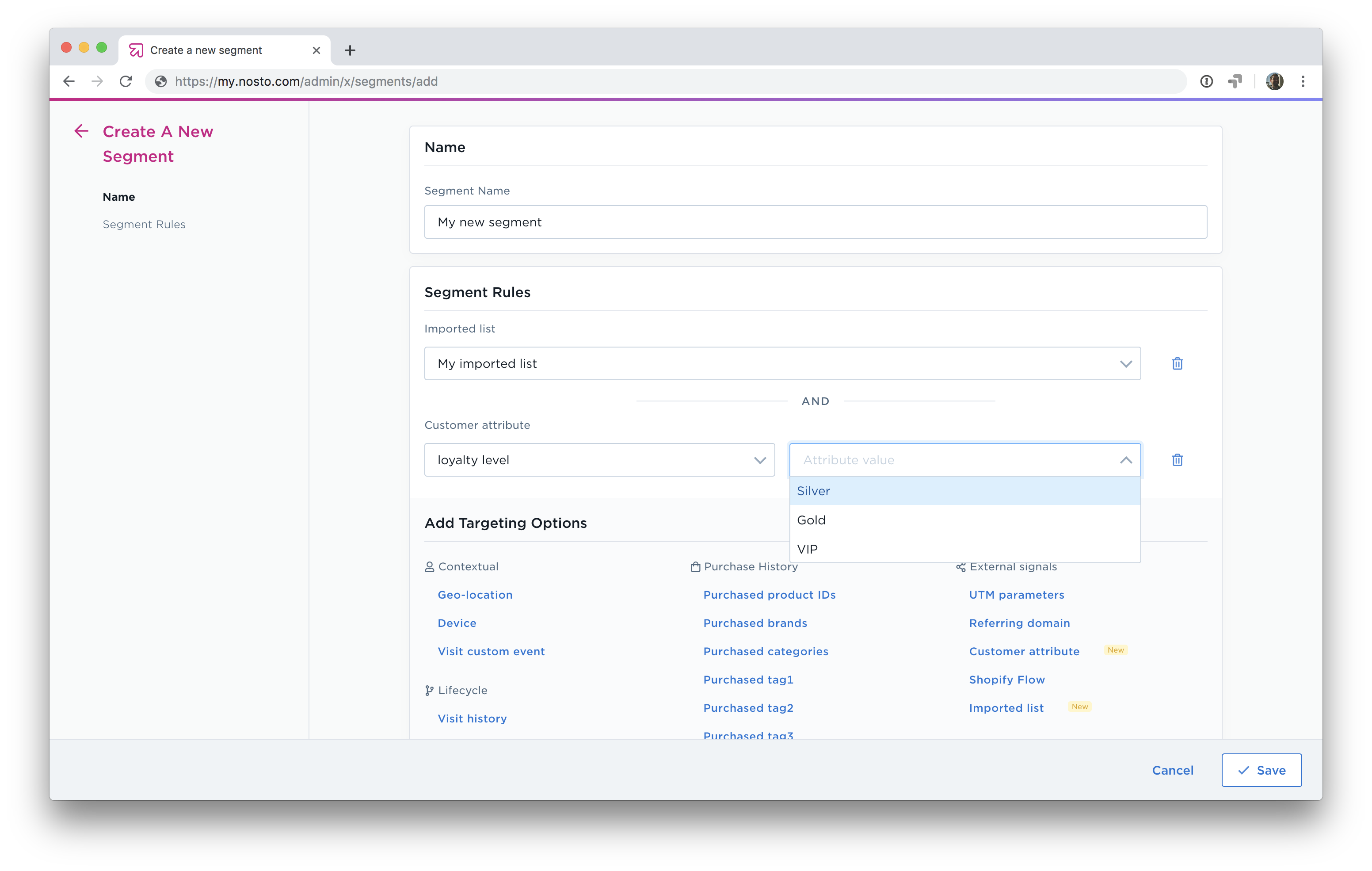 Data import by using API is useful for scenarios and use cases where customer data is mainly processed and managed in a 3rd party system, but when the same audiences will be continuously used as segments for onsite personalization through Nosto.

Manual process through .csv upload in such a scenario is likely not applicable as the data is not continuously updated to Nosto.

The methodology is based on upserting an identity to a segment from the source system by using Nosto's GraphQL API and the associated mutation and endpoint. More information of API based data import in our dedicated guide here.

Nosto's Javascript API also allows manually segmenting users in the front-end. The methodology is not an import mechanism as such, yet it enables the same end outcome, converting existing data and adding customer into a desired segment. More details about the JS API use case here.

This chapter explores how imported segments from a 3rd party system can be merged with existing ones and how the data can be utilized again by using data export functionality in the same or different system.

In a scenario where Nosto supplements an existing system as a segmentation engine and where data export is deployed, one-off data import by using .csv upload method together with segment merging can expedite the process of known identities and segment size. As this is fairly abstract, we pinpoint the problem and the solution with an imaginary example.

The example store, Acme, has previously managed their customer data in a CRM and now wants to deploy these as target audiences for their email service provider (ESP) and Nosto. Instead of CRM, they want to use Nosto as the main segmentation engine for their business as Nosto takes into account also behavioral signals and data, not only transactional data (sales).

As a prerequisite, the ESP has added capability of importing segments from Nosto by using Nosto's data export functionality. (Klaviyo and dotdigital are supported by an integration)

Acme has imported customer lists from the CRM and processed these into audiences in a spreadsheet format according their definition. One of these audiences are customers who have bought products from kitchenware range, whereas Nosto can create a segment which includes customers who have shown interest towards the same range, kitchenware, but have not necessarily yet bought it.

Acme's goal is to target the same group in their ESP with relevant marketing, regardless of the data source: Transactional CRM data or Nosto's data, which includes both.

The steps required to achieve this is to: 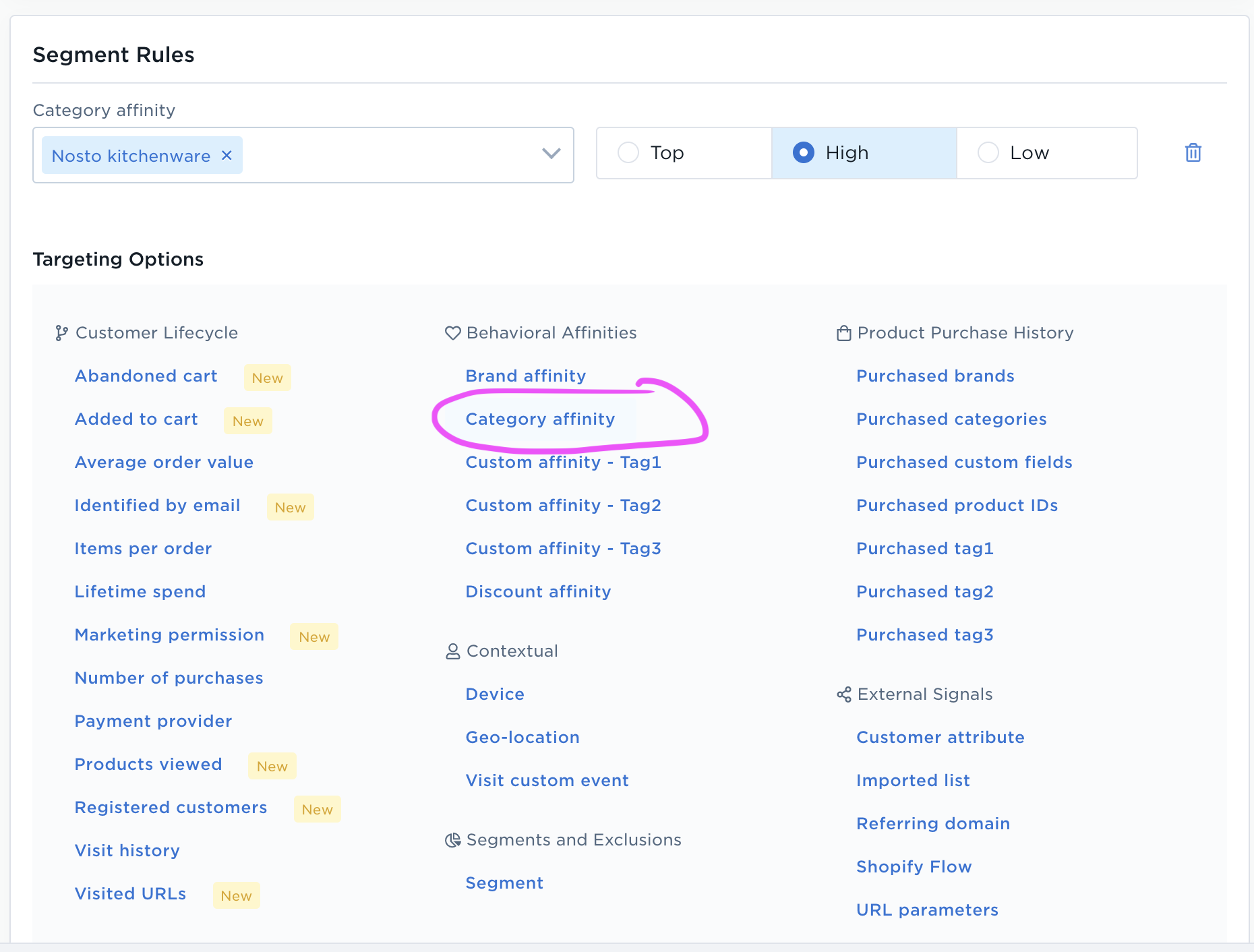 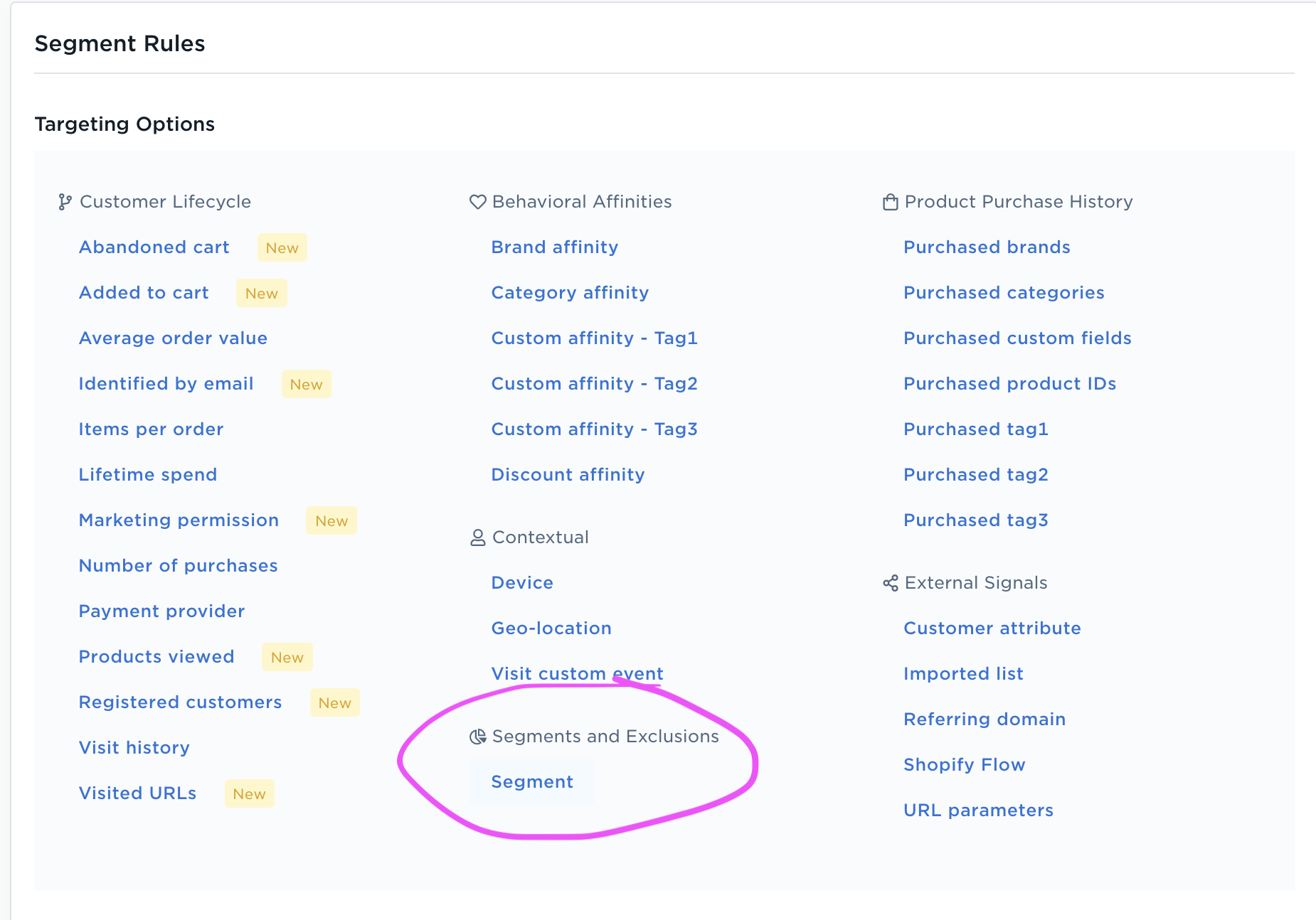 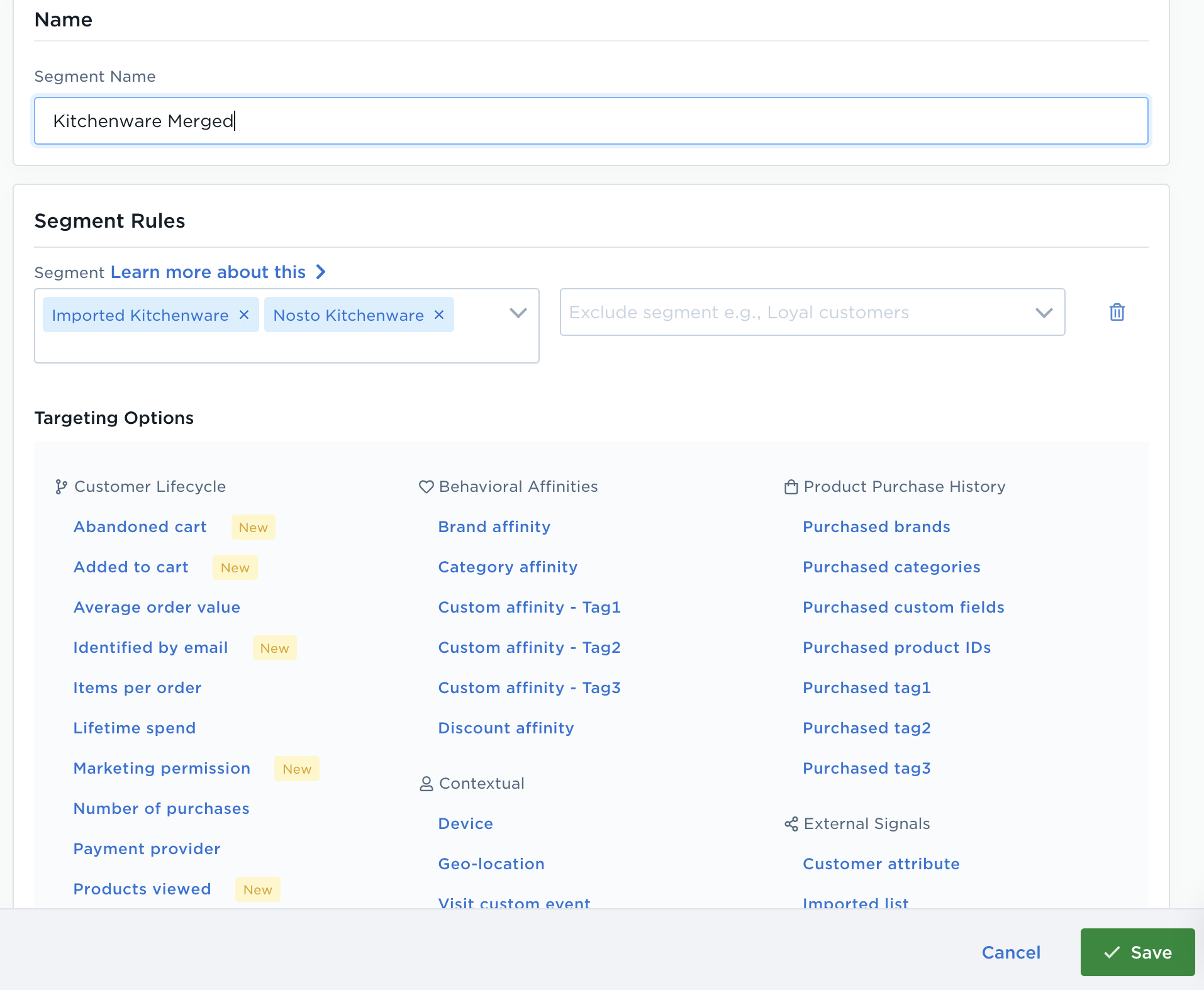 After this step, customers who are in both of these segments will appear in the ESP system as a merged Nosto segment. Alternatively, the ESP can likely merge segments as well, yet the customer data and in our example, Imported Kitchenware audience, need to be imported and into Nosto first.

Outcome of the setup is that Nosto keeps updating its own behaviorial affinity segment, while the imported segment expedites the process and increases the size of the Nosto segment with emails, which can be leveraged in the ESP for better and more granular targeting.